I smell a cat

It’s a confirmed fact that Snowy misses Browny within seconds.

A curious incident happened the other day. I had loaded a new wall paper on the desktop. Snowy came along to the room, gave one look at it and began behaving very strangely… This series of images will tell you what I mean.

Here is Browny bringing another English idiom to life! 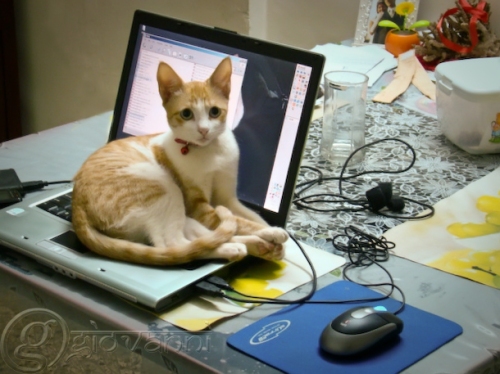 Dating back to 1675, a “cat-and-mouse game” means “a contrived action involving constant pursuit, near captures, and repeated escapes.” The “cat” is unable to secure a definitive victory over the “mouse”, who despite not being able to defeat the cat, is able to avoid capture. In extreme cases, the idiom may imply that the contest is never-ending.

In this case however, the contest ends with the cat getting caught! And then all it has to do is … 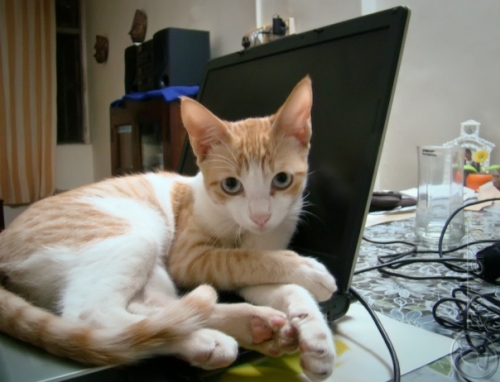 The Cat’s in the Bag

My laptop just got some company!

It’s not surprising… With two cats at home who like to find their own place no matter what you make comfortable for them… this is one of their favorite haunts.

(Imagine my predicament if I had blindly picked up the bag and rushed off to work!) 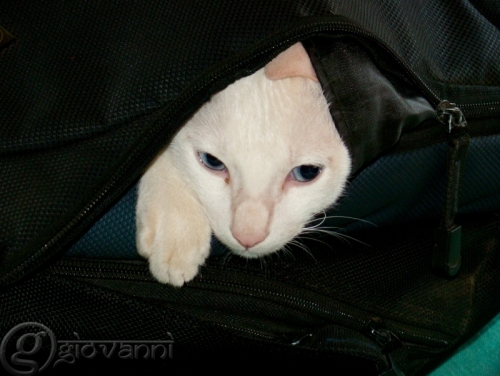 Here is something interesting about “cat quotes”

Many people use the phrase “let the cat out of the bag” to refer to divulging a secret, but they are often unaware of the colorful history behind the term.

In order to understand the origins of “let the cat out of the bag,” it helps to understand how medieval markets worked. During the Middle Ages, markets or fairs were held to sell livestock, produce, and other goods from around a region. Most of the livestock was sold alive, usually in sacks so that the purchaser could bring it home relatively neatly. As a general rule, someone would inspect the pigs, chickens, and so forth for sale and pick one out, and then the farmer would bag the animal so that it could be carried.

Unscrupulous merchants might replace the livestock with a cat, since cats were readily available. The unknowing customer would carry the bag home, open it, and realize that he or she had been swindled. However, the plot relied on not letting the cat out of the bag too early. If the bag was opened in the marketplace, the customer could demand reparations from the merchant, since the secret would be out. Of course, the scheme would also rely on a quiet cat, since most people know the difference between a oink and a meow.

For the coming few posts, be prepared for more cat-attacks! 🙂 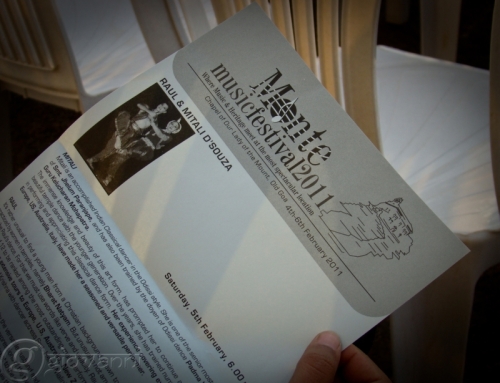 The second year that I made it for the Monte Music festival (here is the earlier post). This time I could only make it for the second day. Two reasons why I eagerly await this festival. First and foremost, the Monte festival is a great photo op and secondly words fall short to describe its magnificence. 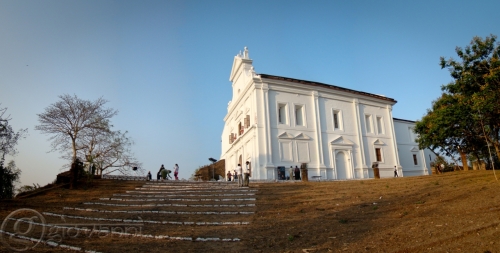 The Monte Music Festival 2011 organised by Fundacao Oriente and Cidade de Goa was held from February 4 to 6 at the Chapel of Our Lady of Mount, Old Goa. This was the 9th edition of this festival which began in 2002 after the restoration of the Chapel, which was in ruins, was undertaken by Fundacao Oriente.

With a greater emphasis on Indian music and dance this year, I got to experience the Bharatnatyam-Odissi dance performance titled ‘Temple Bells’, by couple Raul and Mitali D’souza from Mumbai. Let the pictures speak for themselves. 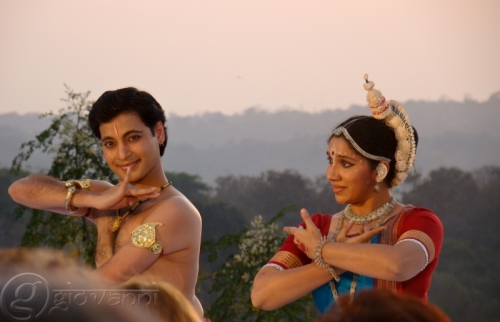 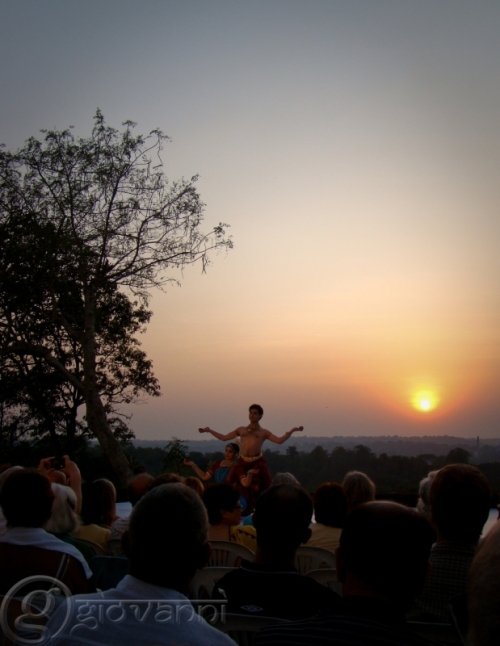 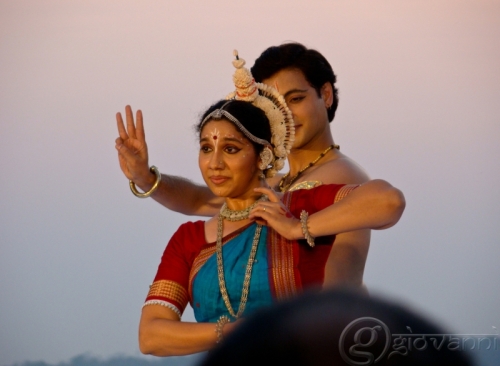 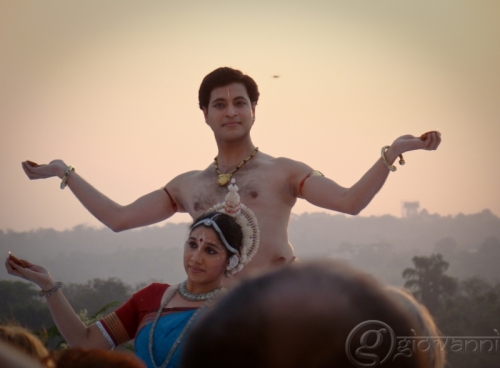 You cannot deny that watching a dance performance silhouetted against such a gorgeous sunset and capturing it in a perfectly framed shot is a dream come true!  😉 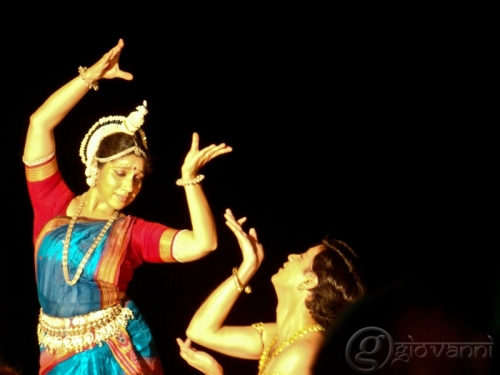 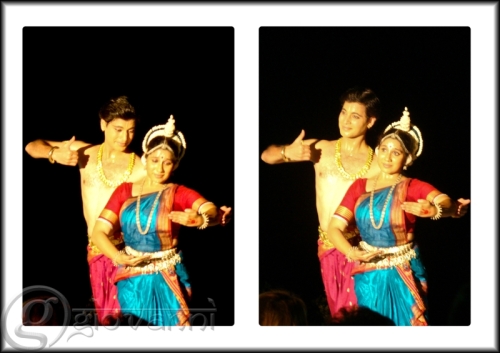 This was followed by an Indian-Western violin recital by Hans Versmeersch from Belgium.

Not did the notes of the violin tug the heartstrings of all those present, but Mr Hans Versmeersch was an excellent entertainer too. 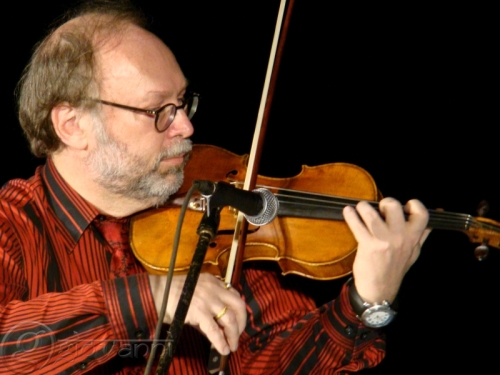 He took us through the nuances and interpretations of the various pieces that helped identify and be part of that time and age in which they were composed… His musical stream built up in tempo and emotion, from melodies of the time of the East India Company, to soulful compositions of Rabindranath Tagore, flowing through Kashmiri and Hindu love songs and culminating in a blend of Carnatic music and Bach.

A short interval followed, where I pointed the camera to the famous “tree” on the Monte that does not escape any photographer 😉

Nobody challenges the fact anymore, that the natural acoustics of the Monte chapel projects the sound naturally and needs no amplification. 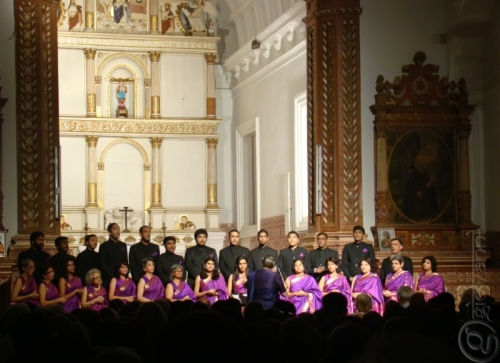 To conclude the second day as predicted by Ms Yvonne Rebello (of Fundacao Oriente), this year the most commendable feature was in fact the performance of the 32-member Paranjoti Academy Chorus from Mumbai conducted by Coomi Wadia .

By a rare chance of fate, I experimented with my camera to try a panorama shot.. and succeeded!

Over the years, the Monte Music Festival has become a much awaited event for music lovers… and I just can’t wait for take 3 😉