Is there a problem?

I was being advised by an experienced cat lover and a good friend on cat care. In the process I began reading the USPCA manual Caring for Cats & Kittens and was in for a nasty shock. 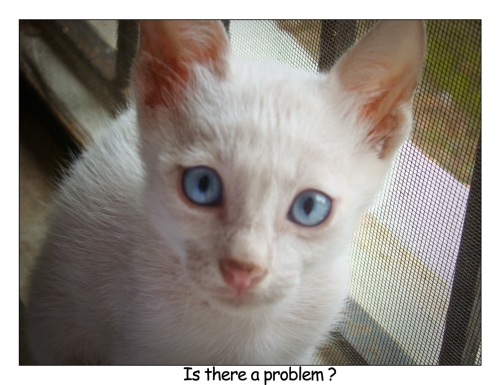 We had always noticed Snowy to be ignoring us when beckoned. Turns out that she is deaf! And through no fault of hers. Believe it or not it’s because she has white fur and blue eyes!

Not all blue-eyed white cats are deaf, but many of them are.

Here are the STATISTICS:

And so, we are lucky to have the one in a thousand cat!

And here is the SCIENCE:

White cats with blue eyes often suffer from a genetic defect that causes their cochlea, a vital organ within the inner ear, to degenerate shortly after birth. This is because the stem cells for the melanocytes (pigment producing cells) and cochlea are the same. White cats with eyes of other colours can usually hear. As for odd-eyed white cats, when a white cat has one orange and one blue eye, the ear on the blue-eyed side is likely to be deaf, whereas the one on the orange-eyed side is usually fine.

Popular belief has it that such cats make bad mothers because they tend to ignore their cries of their young. However, deaf cats can be good mothers and good hunters. Many compensate for their disability by becoming exceptionally sensitive to sound vibrations, thus enabling them to hear with their paws. Vision and other senses may also be enhanced, giving the deaf cat an edge in some respects.

We only have to wait and watch!